Some beautiful babies had long road trips to safety on Saturday!! Woo hoo go Dougie (formerly known as Spirit), who is settling in well in his new foster home. If you didn’t get to see him on our Facebook page or don’t remember him; he lived outside all his life and is covered in scars and sores. 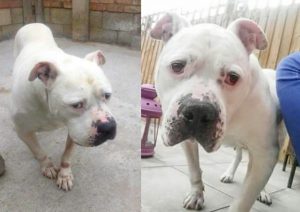 Dougie in the pound (left) and enjoying the garden of his new home.

Many thanks to ALL involved in helping us finally get him into a loving home after some hold ups because of illness. Lauren C, driver Phil for getting him there, Linda for backing him up. Last but by no means least a massive heartfelt thank you to Libi and her partner for contacting us and asking if they could, for the first time in Dougie’s life, take him into a loving home!

Also on a very long road trip was Mr Wonky legs himself, 6 month old Falcor. He isn’t letting those legs stop him bouncing around and he really is loving being out. He is going to need serious and costly surgery to fix this legs and his rescue Cleo’s Mutley Crew Dog Rescue now have a crowd funding page for him. 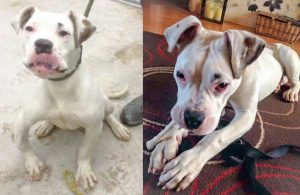 Falcor in the pound (left) and enjoying some home comforts.

Please if you can help at all, we urge you to do so for this gorgeous baby. All the dogs that have escaped death via Team Poundie in last month have had some kind of serious medical problem; and more than one have been taken in by Cleo’s Mutley Crew! So if you have a pound or two to spare please donate here.

It’s been a funny old week and I helped a lovely boy Tuco find a rescue space; that things did not go quite to plan on Saturday is a fact of life and the best laid plans of mice and men do often go awry. So he had an emergency pit stop with Chris and Jill on Saturday night and then was moved to kennels in Manchester on Sunday while we organised his transport and foster home up in Scotland with Cleo’s Mutley Crew Dog Rescue . 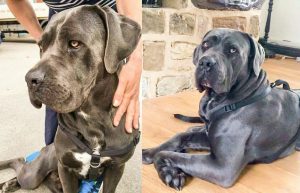 Tuco on his journey (left) and relaxing in his foster placement.

Tuco had a meeting with the vet on Sunday morning just to give him a general health check. He has a problem with his rear end and muscle wastage due to a problem with his back. We believe there may also be something wrong in the hip region and wanted the vet to check him over before he went on another long ride. We decided it would be best to keep him in a foster home to get him neutered before having him move on up to Scotland.
So now Tuco will go to his rescue within the next week or so. We will keep posting updates about Tuco’s progress If you would like to donate to his ongoing costs please send any donations to rescuepennies@gmail.com and write “Tuco” in the comment section.