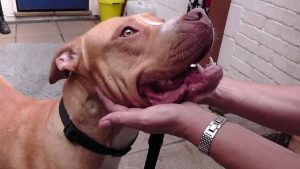 Olive was found as a stray in April 2016 with a prolapsed intestine and injuries which were consistent with her being abused. She was taken in by Hillingdon Borough Council and provided with emergency veterinary treatment so that her condition was stabilised. Unfortunately, someone decided that she looked like a pit bull type dog and therefore she should be destroyed.
Olive’s case was taken up by Alexis Aitchison and Gill Henderson of “Fighting Against BSL” and a home was found for her. They arranged for Olive to be assessed by a qualified veterinary surgeon who is an expert in recognising prohibited dogs. The vet concluded in a detailed report that Olive is not a pit bull type dog. That report was sent to Hillingdon Borough Council in order that they could release the dog to the person who was prepared to be her life time carer. Hillingdon Council have been unable or unwilling to release any evidence that demonstrates that this dog does have the characteristics of a pit bull type dog and instead have chosen to hand the dog to the Metropolitan Police who have stated that they will now begin civil proceedings in a magistrates’ court under section 4B of the Dangerous Dogs Act 1991 which will be contested on grounds of type by “Fighting Against BSL”.
James Parry, a solicitor advocate with Parry Welch Lacey Solicitors, who act for “Fighting Against BSL said, “After two weeks training some police officers are appointed as ‘Dog Legislation Officers’ who dictate whether a dog has some of the characteristics of a pit bull type dog. DLO’s are not independent expert witnesses as they are employed by police forces who are a party to proceedings which are intended to result in the death of a dog. Their decisions are frequently found to be flawed when a dog is examined by a properly qualified vet or other expert. Unfortunately, in many cases dogs are simply handed over to the police and killed because their owners believe that the police have expert qualities they simply do not possess.”
The Dangerous Dogs Act 1991 deems dogs to be dangerous on the basis of their appearance. This is just as inaccurate and offensive as it would be to suggest that a human would behave in a particular way because of the ethnicity or appearance.
Hillingdon Council have spent over £3,300 treating and kennelling this dog only to then try and and kill her. The Metropolitan Police have the highest spend on kennelling costs in England and Wales.
For further information contact: James Parry at Parry Welch Lacey LLP on 0151 480 4061. For images of Olive please contact Leah Partington at Parry Welch Lacey LLP. Gill Henderson 07932 948373. Alexis Aitchison 07710818673